Skip to content
Previous: poems Next: 'In exile: finding home as a queer refugee woman' 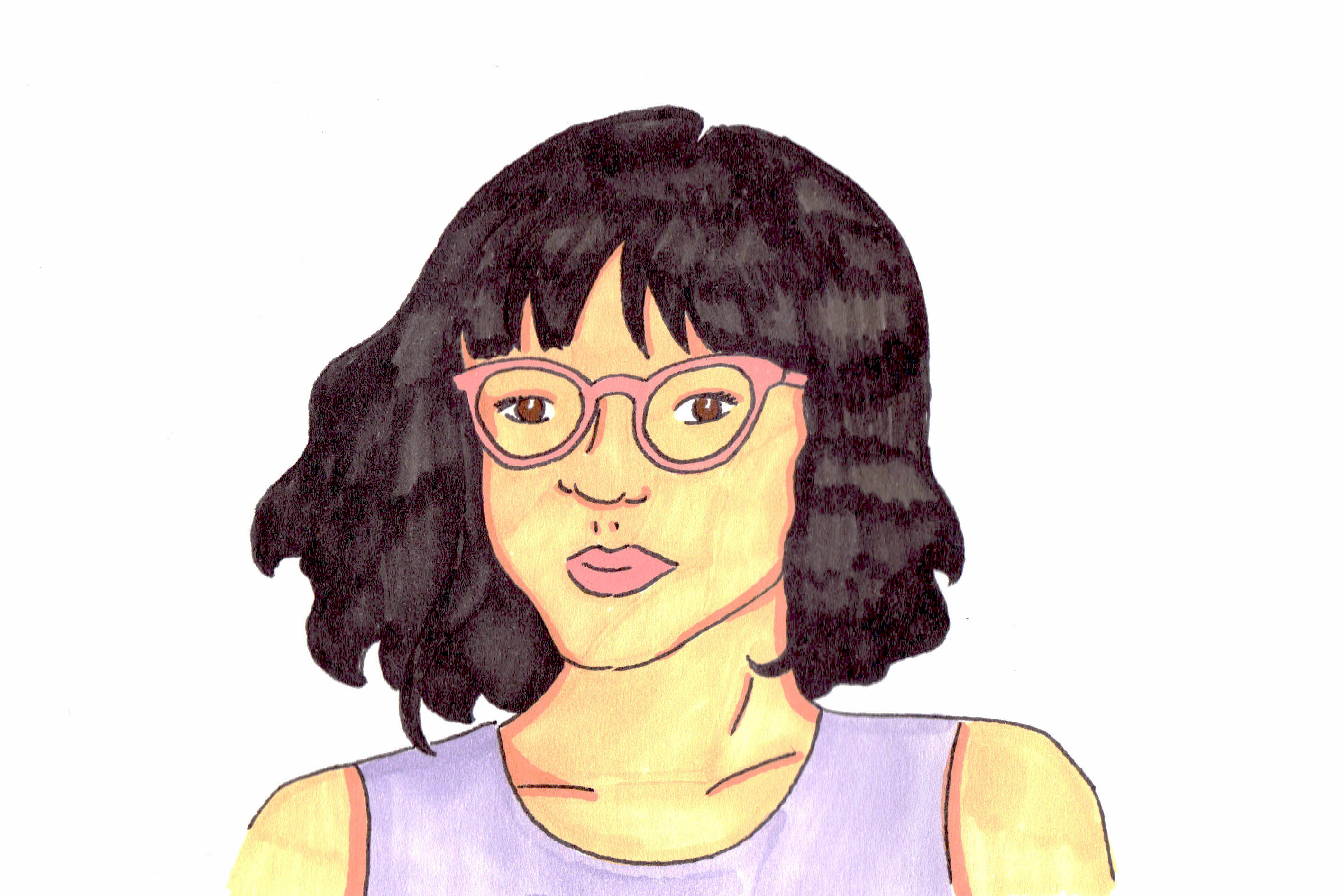 A moment of hypnosis

Ariane loves Christian. Christian loves Ariane’s sister, Isabel. This film is about how relationships that come to an end will be a mess. It’s about many other things, too. Primarily this.

My Sister’s Good Fortune opens with Ariane & Christian standing together under a tree, speaking. Ariane is responding to Christian, who has just ended their relationship. Ariane has heard (we presume) Christian declare his feelings for her sister.

When I first watched this film I thought Ariane had caught Christian on his way out of her life & would convince him he was wrong. Watching it more than once I realised he had already left, but Ariane is pleading in a way that I read as less concrete, more hopeful. But I had watched this as someone who usually is the dumped one rather than the one dumping, so this possibly skewed it all.

Ariane’s object of love is Christian; he is unable to talk to her. They speak like this: detached, distant. Across. Ariane’s Barthesian honesty is muted slightly by this delivery. I can remember when I was desperate like her once before or maybe more than once before. But I could not speak – I could only shout.

Isabel is the object of Christian’s love. Can we choose to succumb or is it a force acting upon our consciousness? Is the process of engulfment slow & unstoppable or immediate?

We die together from loving each other.

Ariane is almost wholly engulfed by sorrow & she is in love with Christian or grasping to desire him in a new & sad way that has sprouted from his rejection of her.

There is little movement in most scenes. Characters speak. Sit. Are mostly still. A sense of this stillness throughout but also broken up with the occasional scene of walking or traffic.

I like to think I control when I succumb but in the early days of mobile phones I called & called & called & left repeated voicemails & then threw my phone away or took the battery out so I could tell myself I would determine the next communication on my terms. It was a painful lie to exhibit.

This opening conversation in the film: Ariane tells Christian she doesn’t know if she is in love with him that day. It is a barrier to becoming absorbed by the ground. What is more painful out of falling in love vs being in love? Ariane is across the crevice of this. She was in love with Christian but he is turning elsewhere. His torso faces away but perhaps his feet are towards her still so she is now falling in love again: the process is partially reset but caught in this loop. The image of the other…no longer exists.

It causes me stress to watch love become complicated or painful. How can I gather a perspective? Only those who are inside it can know, but also: they don’t know how to move or act. The characters here are all so sure of what to do but have no idea how to protect themselves in the process. The engulfment is more like quicksand than flames.

Love is like a slow death you see coming or it’s the end of your personhood or it’s you but fundamentally altered forever – your constitution abolished, rebuilt with new knowledge.

If we long to swoon are we weaker for it?

The loved object does not speak

Ariane & Christian meet again. He has now told Ariane that he will move in with Isabel.

The frame is tight around their faces: she huddles close, her face leans into him; she tells him how thinking about fucking will make her unable to think of anything else.

How thinking about fucking is the best distraction. If only they can just go home & fuck & he can think about Isabel if he wants. She tells him it’s okay if he thinks about someone else. She asks him about Isabel. What is it about Isabel?

I can fill myself & burst with filmic renditions / dramatic declarations. Hopeless pleas. All it takes is a glance to the side or behind. Shame is a delayed reaction.

Isabel has these phrases. These are phrases that make her a desirable person to Christian. She is rendered his object of love & these phrases now compound this. Upon hearing about Isabel’s phrases, Ariane pulls her face away. She looks out, no longer huddling into her lover. No longer imploring. Talking is now too much.

Language is a skin: I rub my language against the other.

A loved object should not speak in return. It will change the dynamic if they become human. The loved object can only be ethereal / a sprite. A ghost, an aspiration.

What will happen when Christian takes his final step towards Isabel & away from Ariane?

Ariane & Christian are softly spoken, inquiring. Helpless in their discourse. In love but wildly circling each other’s wish.

Ariane’s tone when speaking does not oscillate wildly – the musicality of her voice is always plaintive.

The sad sorry state of being.

Shots are often static. Characters move off-screen, talk from beyond. Characters on screen address the person not in view. Occasionally a filler: a bus stop where passengers alight to return home for the evening. Traffic intersection under overcast sky.

The palette: mute, uniform tones – taupes, pale blues, washed-out eggshell. The colours of uncertainty & maybe another element I’m not ready to admit yet.

The film’s compositions are like fragments: linked but episodic.

Talking is always intimate – it is how characters offload & the delivery is restrained even if the content is not.

To practice a relation without orgasm.

To speak language that trembles with desire.

When I’m nervous or excited or have a heavy idea in my head I talk more than a person should (especially a person who proclaims to write rather than speak). I can’t just talk at them though, I need active response. I will keep talking the more I realise I must stop.

Talking turns a person away. Talking makes me not a good listener. Talking is an unloading of anxieties onto another person: it demands a piece of their flesh. What though when (dreaded) love is involved? Ariane talks & talks but when she hears something she doesn’t like, she turns her head away & her talking turns from pleading to chiding. [‘What kind of photographer doesn’t carry their camera on them at all times, anyway?’]

This scene makes speech its fulcrum. Even the sense of Isabel in it: not Isabel as a person. Isabel as the way she speaks. The fact is that he noticed it.

‘Talk to me, are you keeping warm?’ [Ariane]

The other world as a generalised hysteria

Christian has reinforced his split with Ariane; he has moved out. Ariane visits Christian at his apartment & says this to him: ‘I don’t comprehend that I never see you. I can’t comprehend it.’

This is a break-up that is messy but mostly polite. Then again, there is unsettlement at the corners. Ariane sees that Christian has got a cat & suddenly is concerned about whether the cat has a proper place to shit.

Without Christian in her life, Ariane’s encounters with the world have shifted. There is a thick sheet between her & the people & objects she comes across every day. How does one continue after they have been left for another? What conversation is there still to have? What if the talking does not cure but scrapes away at the object-person & the speaker, reduces & distils complexity & renders it mellow. Melodramatic. Flattened.

Reality as a system of power

But Ariane is left with no power. But perhaps the visibility is reworked. Then again: perhaps the terms have changed. Perhaps: power is in the Leonard Cohen CD she gifts Christian & Isabel. An act of platonic care. It might also be a gift that is a passive aggressive gesture. It says: Ariane no longer finds pleasure in listening to Leonard Cohen & in gifting this to her now ex-lover she hopes to make a talisman for him out of the sound association he robbed her of.

There are precise movements going on here. Ariane stands & watches as Christian finds a shoebox. She steps into the kitchen and leans against the back wall, looking towards us; towards Christian. He picks up a nearby pot plant & fills the box with dirt from the pot. When I watch a person perform a small, careful movement & everything around seems still, I cannot focus on a thing. That action becomes an object of my desire – clean lines; perfunctory movements & gentle still air & I’m suddenly aware of the projection of my personal flaws onto an object. It’s worse when the object is a film character, too. The film is where my desires – romantic & narcissistic & other – become sharply coherent & fortifying.

Is there a non-thunderous disreality? A sort that is quiet, possibly?

A lover surrenders himself to the Image, in relation to which all “reality” disturbs him. I’m thinking about Ariane so much. How can she be so gentle & severe at the same time?

Is disreal like how the unconscious cannot be articulated (lunge[d] at) without erasing itself by manner of utterance?

& how about the psychic space between lovers in orbit: what does crumbling world reality life face objects & skies, home &c. …

I mean what does it sound like wshen these psychic spaces collide but do not collapse?

I mean how can anybody function when their time is spent between paralysis & fear & love & desire?

I mean how does an advancing network of emotions contain a conclusion?