Skip to content
Previous: 'Blood Brother' Next: Episode 38 of 'The Garret' 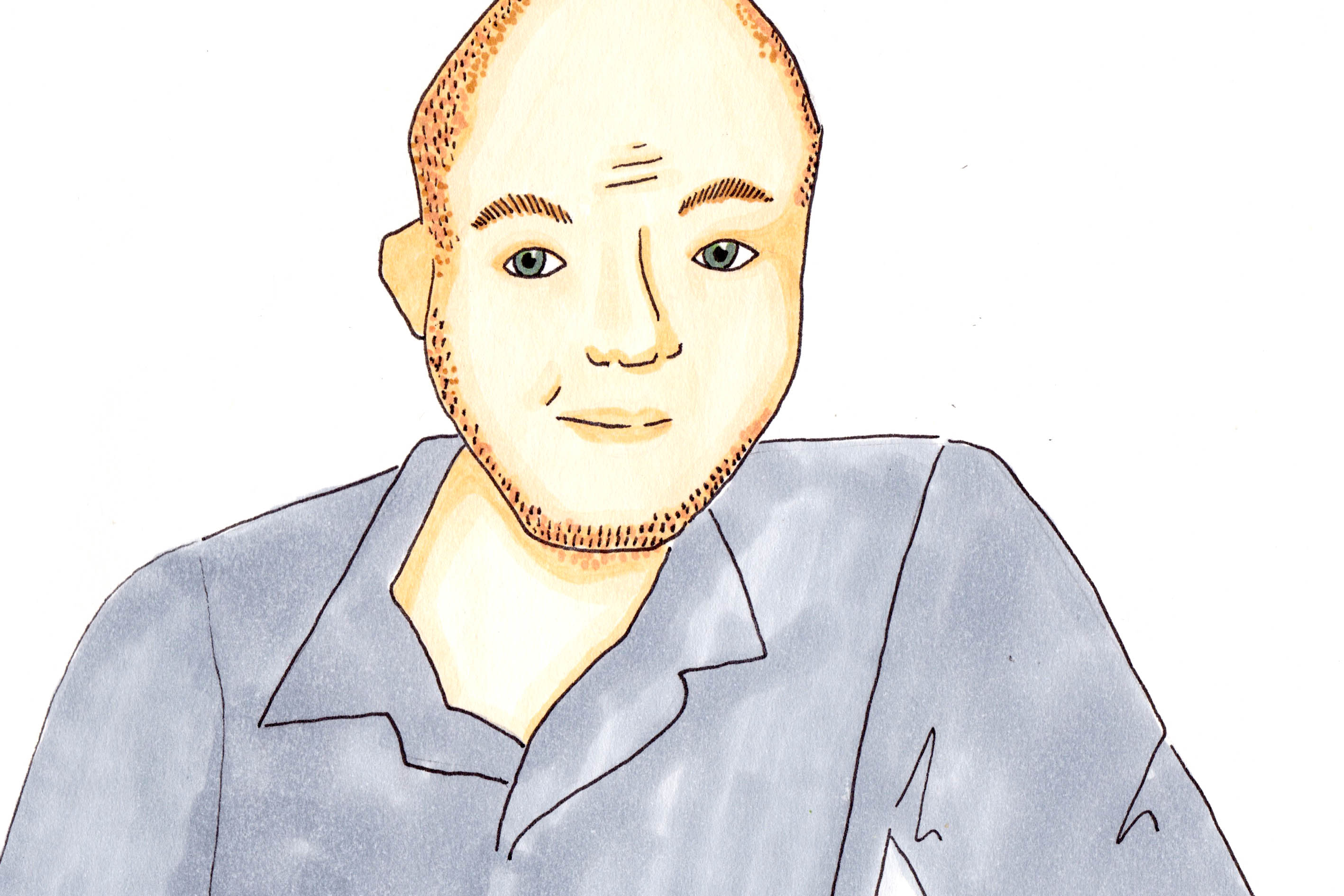 She was waiting for him at the station as he got off the train the following afternoon, standing on the other side of the gate with her schoolbag slung over her shoulder. Roland showed the stationmaster his pass as the man reached up to unhook the stopping-all-stations sign, his pale face smudged with redness in the cold and the whistling wind. He nodded and started sorting through the row of enamelled signs leaning against the wall. Cassie was in her blazer and long winter dress, white socks folded just below the knee.

‘I saw you before, when I was waiting for the train,’ she said to Roland as they went down the ramp. ‘You walked right past me.’

‘Yeah, I know. It was like you were in a world of your own,’ Cassie said, her voice sing-song and echoing through the dank concrete tunnel. Water was dripping from the ridges of mortar segmenting the ceiling, forming pools in the crum- bling bitumen floor. The children stepped around them. They walked up the lane beside the milk bar and through the carpark to Creek Road, Reg Noble’s face watching them from the back windows.

‘So are you friends with Darren Wilson now?’ Cassie asked Roland.

A bus rumbled past, belching thick exhaust fumes as it went up the hill. It had been washed by the recent rains and its windows and fluted sides gleamed. A girl knocked on the glass and waved. Cassie waved back and turned to Roland, a loose tress flaring at her ear. She brushed it back.

‘Hey, is it true what happened with that Todd guy? And that spastic friend of his? That they scratched up someone’s car or something?’

‘Yeah, because they were going around boasting about it to everyone.’

‘Yeah. They’re such idiots.’ ‘Where did you hear about that?’

When they came to the Nobles’ house, Cassie invited Roland in. Colleen was lying across the couch in the living room, watching Wheel of Fortune. A half-drunk vodka and orange sat on the coffee table.

Colleen replied in a blurred voice. On the screen, the wheel spun, music playing as the moustached host chattered. Smoke curled from the cigarette lying in the ashtray.

They got some Cokes out of the fridge and went up to Cassie’s room. It was exactly as it had been last time Roland was there: immaculate, everything frilly and childish, that same powerful smell of lemon-scented washing detergent coming from the crisp, clean sheets on the freshly made bed. They sat on the carpet.

‘What does Darren think of me anyway?’ Cassie asked Roland.

‘Hasn’t he said anything about me?’

‘All I can remember is that he told me you got really angry at him once.’

‘After he told Lily off. When he told her to leave him alone.’ ‘Yeah, but that was ages ago. Hasn’t he said anything else

‘No. Not that I can remember.’

‘Because I’ve sort of been bugging him,’ said Cassie. ‘I’ve been writing letters to him and leaving them in his letterbox. Just about stuff. About me. I sort of think, “Oh, I might write Darren a letter,” and then I write one even if I don’t have anything to say. I don’t know why. And sometimes I go around to his house when I can’t sleep. I tap on his window and wake him up and stuff. And I’m all sort of, “Hi, I can’t sleep and I’m bored, what are you doing?”’

She was tracing patterns on her lap as she talked.

‘I brought flowers over to him the other day. I just started picking flowers from everyone’s gardens on my way home from school, and by the time I got to Darren’s house I had this huge bunch of flowers, but all different flowers and bits of weeds and stuff. It was sort of a mess. So, anyway, I just walked into his backyard and handed them to him.’

Crimson spread across her cheeks as she glanced at Roland, her eyes sparkling. She buried her face in her hands and let out a single, muted shriek.

‘This big messy bunch of flowers. From people’s gardens. And his friends were all sitting there looking at me, prob-   ably thinking, “Who is this weirdo?” I was too embarrassed to say anything so I just sort of ran off. I think he thought I was completely crazy. I think that’s what he thinks about me, that I’m just this weird crazy girl who’s hassling him all the time. Which I am, I suppose.’

She took a sip of her Coke and uncrossed and recrossed her legs.

‘I just really like him,’ she said. ‘I get all hyped up and over- excited. That’s what my mum says all the time. She’s always saying, “Cassie, you’re overexcited, you need to calm down.” I suppose she’s right. I don’t know. I go around to his place and I just talk and talk and talk. And, you know, Darren’s always so cool and everything. I think I sort of freaked him out when I showed him my scars, though. Have I ever shown you my scars?’

Cassie held out her arm, turning it, and showed Roland the crisscrossed rows of raised white lines along the inside.

She examined the scars, running her fingers over the pearlescent skin.

She uncrossed her legs and hitched up her skirt, then gath- ered the material and rolled her leg over to reveal the fine red lines and pink welts down the creamy skin of her inner thighs, the freshest of them beaded with dark dry blood.

‘When I was doing it on my arm, my mum said I was just doing it for attention,’ said Cassie. ‘So now I do it there, where no one can see it.’

She pulled her skirt back down, smoothing it over.

‘I’m pretty fucked up,’ she said, her eyes meeting his. She ran her finger along the carpet, picking at it.

‘I don’t know what Darren thinks of me now,’ she said. ‘What do you think?’

‘Do you think I would have scared him off or anything?’

Roland thought about it. ‘I think what Darren’s really good at is that he sort of understands other people. Sometimes, even if I don’t say anything, he seems to know what I’m feeling anyway.’ Cassie’s face lit up. ‘Yes,’ she said. ‘That’s what I think too.

That’s exactly what I think. Sometimes, when we’re talking, I think, “Oh, he actually seems to get me.” Like he really gets who I am and everything.’

She blushed furiously and remembered her Coke, gulping it down. They both stared at the floor in silence.

‘Hey,’ Cassie said finally. ‘Do you want to do Valium and listen to some of my dad’s records?’

She left the room and came back with a portable record player and a pile of records, a slim box of Valium slipped into her blazer pocket. Roland saw Colleen’s name on it. ‘Won’t your mum know?’ he asked Cassie.

‘She knows anyway,’ said Cassie. ‘My mum was the one who started giving them to me, to calm me down when I get over- excited and stuff. So now I just take them whenever.’

She sat back down on the floor and began flipping through the records.

‘My dad got most of these when he was in the army in Vietnam,’ she said. ‘He was friends with this black American guy who used to get them from America. Whenever my dad went around to see him, he used to go, “Man, you got to dig this.”’

Cassie did the accent, rosiness creeping across her cheeks again. She pulled out one of the records and showed it to Roland. It was a single by The Doors, ‘Riders on the Storm’. Cassie traced her finger over the picture of Jim Morrison, who looked out at the camera from under a shock of thick hair, one hand outstretched and his fingers splayed in a gesture of supplication.

‘I used to be so in love with Jim Morrison,’ said Cassie. ‘I actually used to write him letters as well. Like, a heap of them. And so then I went and asked this teacher at school about him. She’s pretty cool. She’s lived in America and everything. So I asked her if she knew how I could get Jim Morrison’s address. And she said, “Oh, didn’t you know, he’s dead.” And no joke, but I actually burst into tears right there. I’m such a dork.’

She put the album back in the pile and continued shuffling through them.

‘Anyway, so apparently he died years ago. Before I was even born. He’s buried in this cemetery in France, and all these people have written signs in the cemetery that say things like, “Jim is here” and “This way to Jim”, with arrows showing the way to his grave, and people sit around and play his music and stuff. I’m going to go there one day. I’ve got it all planned out.’ She took out another album: Marvin Gaye’s What’s Going

‘This one’s my favourite when I’m on Valium,’ she said to Roland, showing it to him. She took the blister pack out of the Valium box and pushed out six yellow tablets. She handed two to Roland and took four for herself.

‘I’ve built up a tolerance,’ she told him. ‘Two used to be heaps for me, but now I just feel normal unless I take at least four.’

They swallowed them with the metallic dregs of their Cokes. Cassie turned off the lights and put the record on. There was laughter and voices, the wail of a saxophone and the throb of a bass guitar, a voice that was almost tearful. Lying on the carpet with the music playing, the two of them fell asleep like children.