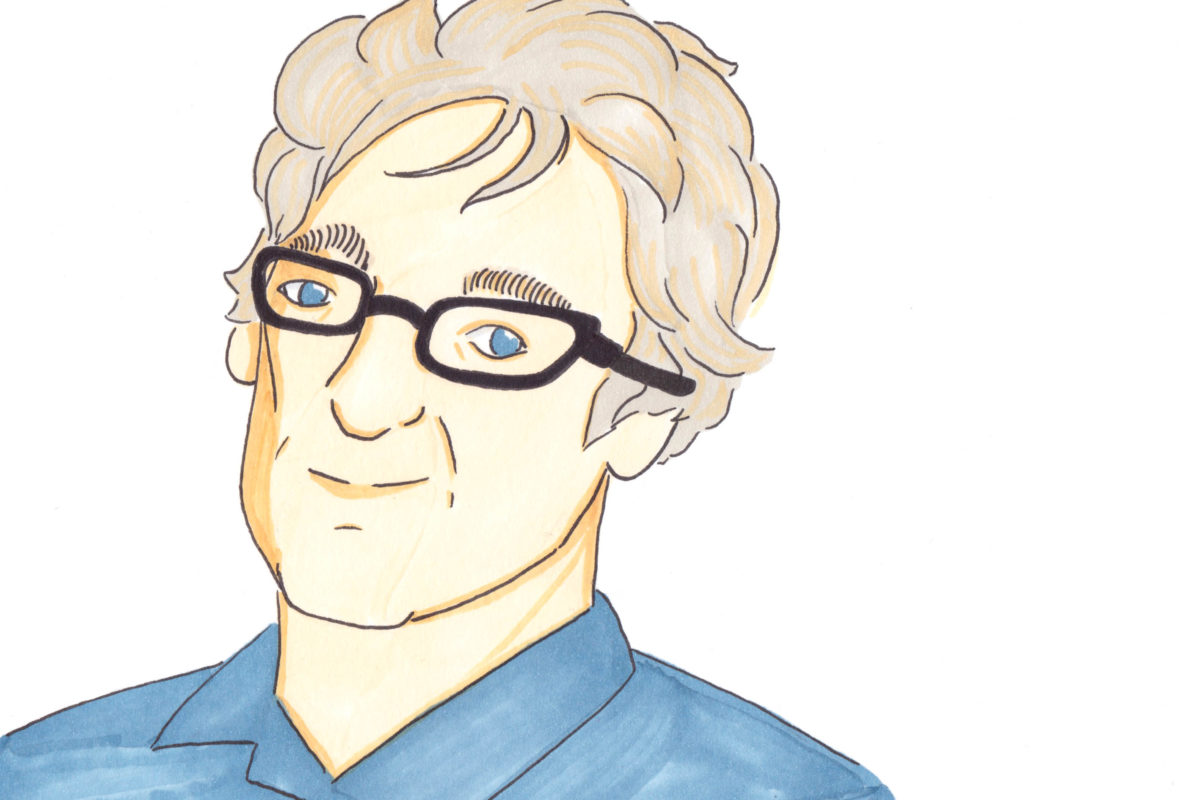 Can we cheat death with words? Of course we can’t – but we’ll probably die trying, as David Astle attested at the Wheeler Centre Gala 2017.

It’s dark. The fridge is humming. You’re lying on a hotel bed, half-awake, half-asleep – neither here nor there, to be honest – the maritime blink of a smoke alarm on the ceiling. The fitful whine of traffic on the street. Beside you, a clock is pulsing, moving the numbers from 3.33 to 3.34 and then 3.35. You know what comes next, right?

So maybe that’s not your ringtone. Maybe you went for the marimba, the guitar strum, or the old-fashioned Bakelite phone.

Perhaps you picked the choo-choo train; it doesn’t matter. At the end of the day, you are your own ringtone. No matter where you travel, which bed you choose – your call-sign will find you.

Worse than that, tomorrow, next year, your phone will erupt at 3.37am or nearabouts – so early you know the news before words have time to shape. You know the implications in a heartbeat, the flavour of the message. It’s why we say the dead of night, the witching hours. It’s why nothing good happens after 1.00am. I lay there watching my phone squirm with every jangle of the pinball machine.

My plan was simple. The longer I resisted answering, the more the news would un-happen. That was my logic. Not only would the caller quit, give up before the voicemail kicked in, but the news would evaporate, too. At 3.37am, nobody calls with the cheery stuff.

… we slumber to remember the dead, to honour them with mimicry.

Many of us have received that call already; all of us will receive it at some point in our lives. Do not ask for whom the pinball chimes, my friends. Nobody can hide. Like it or lump it, death has all our numbers.

Heaven forbid, maybe tonight is your turn for that unrequested wake-up, that hideous alarm. At 2.14am, or 5.06, the sudden marimba, the gate-crashing Taylor Swift, and you will lie there, awake to the news, aware to the brunt of it before you can touch the screen and say, ‘Hello?’

In Arabic folklore a black camel pays a visit. Even if you’re sleeping in a Sydney hotel, the camel knows which floor you’re on, which way to turn from the elevators, which door to pummel. Either the camel collects you, or carries news you don’t wish to sign for, a beast of burden bearing a burden just for you. Special delivery – just sign here, and here, thank you. Have a nice day. Duties done, the camel then leaves us, deserts us, every man and woman in this hall, every child, every usher, every stagehand, every dignitary. Before too long, the camel is a plume in the distance, obliging us to hitch the new load on our own shoulders, the burden that’s never light.

In Greek, the word is Thanatos, the ancient god of death. Not a camel, but a handsome dude with a lantern jaw. His cute twin is Hypnos, the deity of sleep, the living form of death. Temple carvings show the brothers asleep like spoons, nestled so close you can’t tell them apart. Every image of the twins is like a game – daring you to pick which god is dead, and which is playing possum. It makes you realise we slumber to remember the dead, to honour them with mimicry. Or we take the chance to rehearse our own death, a dummy run on the queen-size, that final rest in peace until the peace is broken by a phone.

Dozens of euphemisms, a hundred aphorisms, all in a bid to camouflage the casket in the room: so much oratory to sidestep the mortuary.

By way of legacy, Thanatos gives us ‘euthanasia’, literally ‘a beautiful death’, and ‘thanatopsis’, meaning ‘a contemplation of mortality’, looking at death square in the eye. Tonight in Hamer Hall, it’s one great thanatopsis, a thanatopia … a toast mortem.

The Latin word morire means ‘to die’. The verb gives us ‘mortal’ and ‘mortuary’. Next time you feel mortified, keep in mind your shame is so profound you long for the earth to swallow you up, entomb you. ‘Murder’ comes from mortem, too, as does ‘mortgage’, a payment pledge you make to your bank until you ‘close your umbrella’, as they say in Costa Rica.

In Romania, you ‘turn the corner’. In China, when you die, you ‘join the mountain path’. In Russian, you ‘play the snake’, ‘glue your slippers’, ‘give your best skates away’. In German, ins Gras beissen: you ‘bite the grass’. And in Chilean, irse al patio de los callados: you ‘enter the courtyard of the hushed’.

Because death is nature’s way of shutting us up, closing the lid on the argument, stealing our breath. After last rites, and famous last words, the dead have no more to say. All talk is done. Down comes the silence, that bottomless lull between the bells. The moment you hear the hush inside the clangour, you cannot unhear it.

Haunted, we do our best to cover the silence. Disguise it with Beethoven and Call of Duty III. We medicate, intoxicate. We invent sports, game shows, recipes. To keep death on hold, we bow to Eros – the nemesis of Thanatos. Charles Bukowski called sex ‘kicking death in the ass while singing’. Life-affirming, life-making, sex is a slap across death’s chops, a needle through the camel’s eye.

Then there’s English, so generous when it comes to dying – so much slang, so many synonyms – proof that anxiety makes us garrulous. According to Roget, we don’t just die, but go ‘the way of all flesh’, ‘the way of the dodo’ – ‘crossing the Jordan’ to ‘cash our chips’ and ‘buy the farm’. Idiom lends us courage, helps us put death in a box, give it a taste of its own medicine. But really it’s just barbecue banter, where people never die but ‘pop the clogs’, ‘kick the bucket’, ‘count the worms’. Diggers at Gallipoli talked about going ‘west of hell’, of ‘biting the dust’.

Lying awake in a hotel room – after the bells, the news, the conversation I had to have – a deeper silence settled in, louder than the fridge if that was possible. Lying there, my mind became a dictionary, thinking how we fall, we lapse, we pass away, we check out. No longer for this world, we give up the ghost to join the great Wheeler Gala in the sky. We depart. We succumb. We assume room temperature. Dozens of euphemisms, a hundred aphorisms, all in a bid to camouflage the casket in the room: so much oratory to sidestep the mortuary.

Imperfect, of course, since death will prevail, despite our awesome vocab. Talk all you like, sing, tell stories – but death is due the final gag. The ultimate gagging. Even English is wise enough to recognise the tedious kapow of death.

In China, when you die, you ‘join the mountain path’. In Russian, you ‘play the snake’, ‘glue your slippers’, ‘give your best skates away’.

The gaps in our language – ‘semantic gaps’, we call them – seem deliberate. The moment your last parent dies, you matriculate into orphan. Bury a husband and you qualify as widow. Lose a wife, a widower. But should your child die, perish the thought, even English is bereft. There’s nothing to cloak the nothingness, no syllables, no word, as if the gap in the dictionary is the wound itself.

Only a few languages rise to the challenge. Hebrew has av shakul (a father who’s lost a child) and em shakula: the childless mother. East of Alice Springs, across the Barkly grasslands, the Wambaya people have damanggayirna – the woman in mourning for her child, and damanggayi – the grieving father. Beyond that: silence. No more bids, no more languages, an open gash in the glossary. A crack in the vocab where the darkness gets in.

‘Words after speech, reach into silence,’ to quote the dead poet. Sex and drugs and vernacular can only do so much to stem the unavoidable – every death will have its day. Or early morning, in my case, 3.37am in a Sydney hotel. Not that I could lie in bed too long: 3.37 turned 3.38 and 3.39 and so on. Soon I needed to carpe the diem, get my mortal arse in gear, put on a brave face, prepare for the day. As Sancho Panza was fond of saying: ‘To the earth the dead/the living to their bread.’

Outside the day was wasting, the traffic getting busy, the curtains transfusing with light. Still in shock, standing in the bathroom, I gazed at the mirror, heavier for the phone call – both emptier and heavier, which makes no sense. I stared at the glass and you stared back. As I swept the razor across my cheek, your ghost emerged. There you were, lurking in the sudden heirlooms of my face, each feature set in stone, your lips and jaw rising into view as the lather disappeared.

Standing at a basin, naked as the day I was born, I could hear a family phrase taking shape in my mouth, your mouth: ‘Live every day as though it is your last, because one day – one random morning – you’ll be right’. 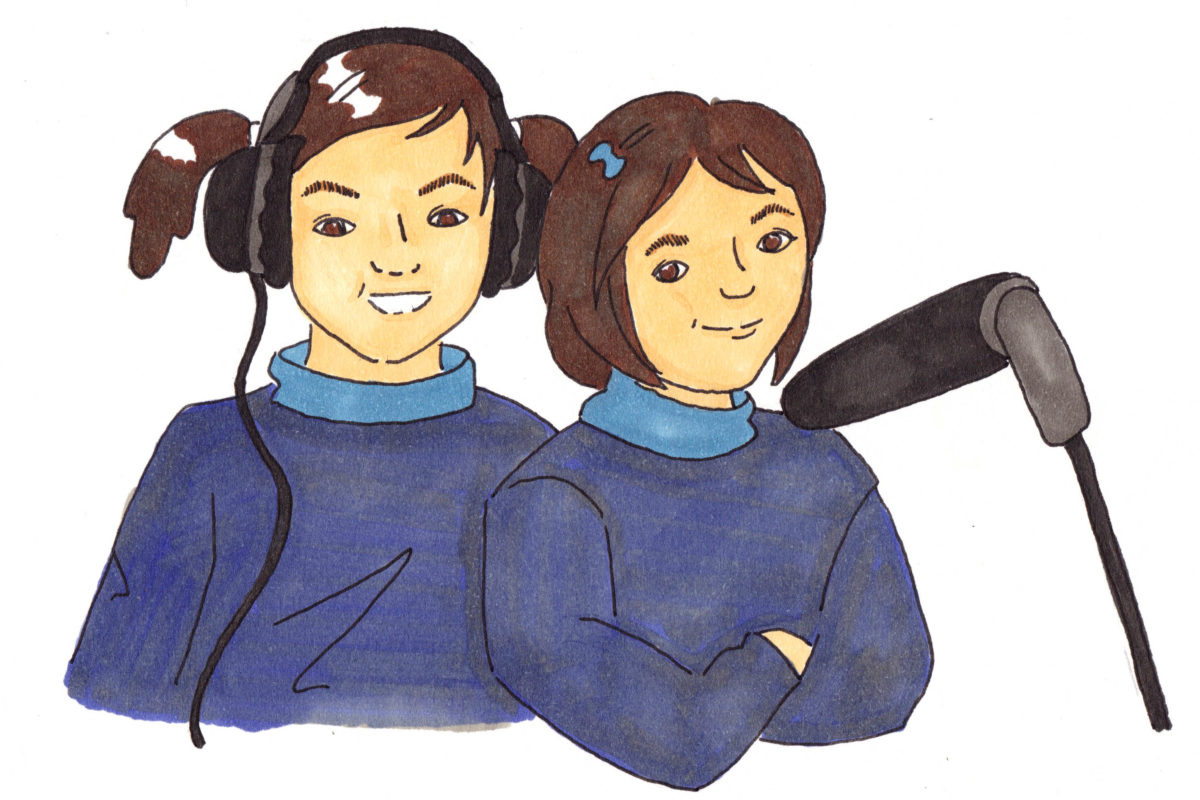 Thirteen young editors from Melbourne’s west investigated many a crime and murder mysteries lurking in their neighbourhoods to put together the sixth issue of early harvest: 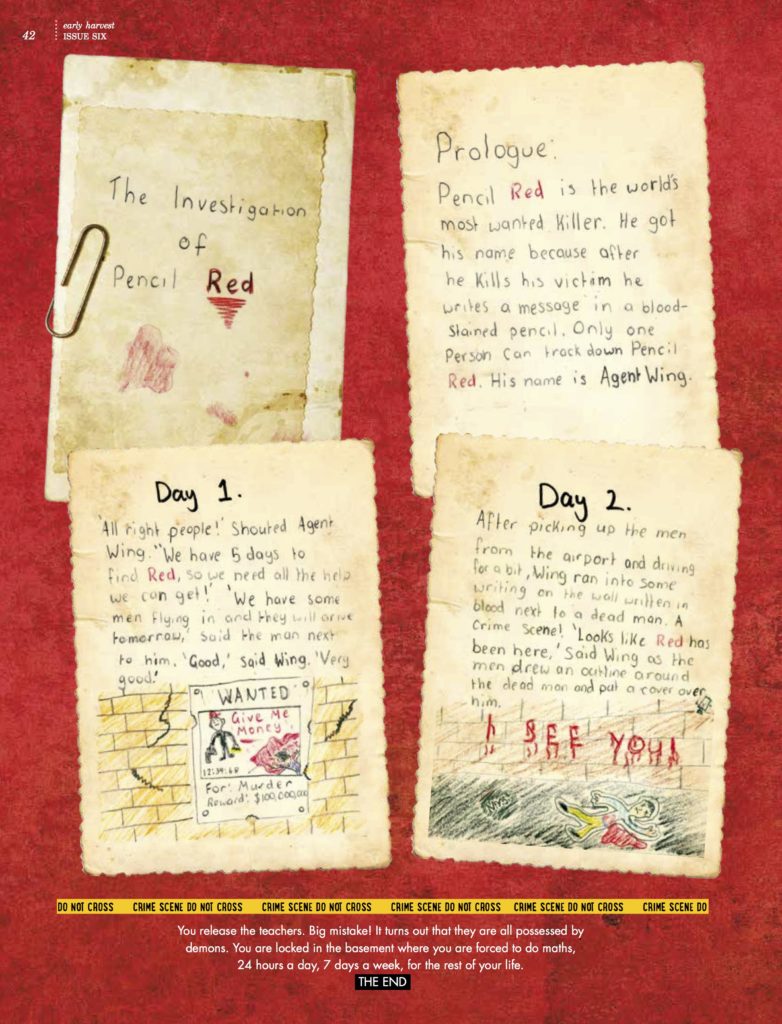 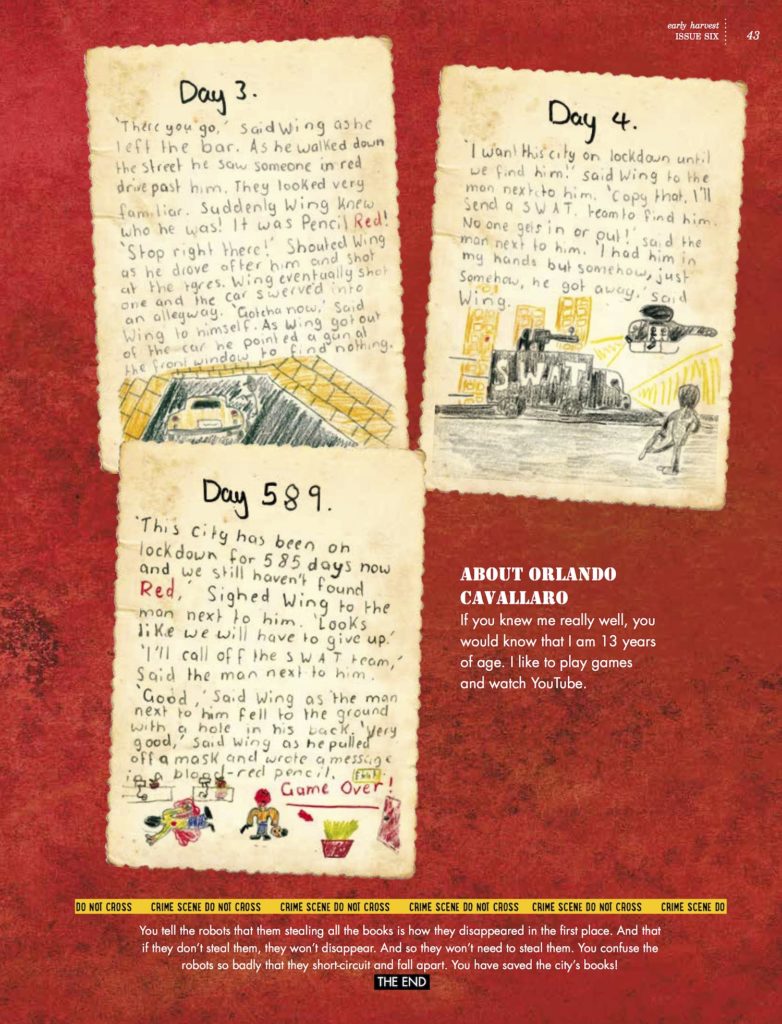 ‘Terror at 1000 Storey’ is a collaborative, interactive story about you, your dog, and a towering inferno! Go on press the link… 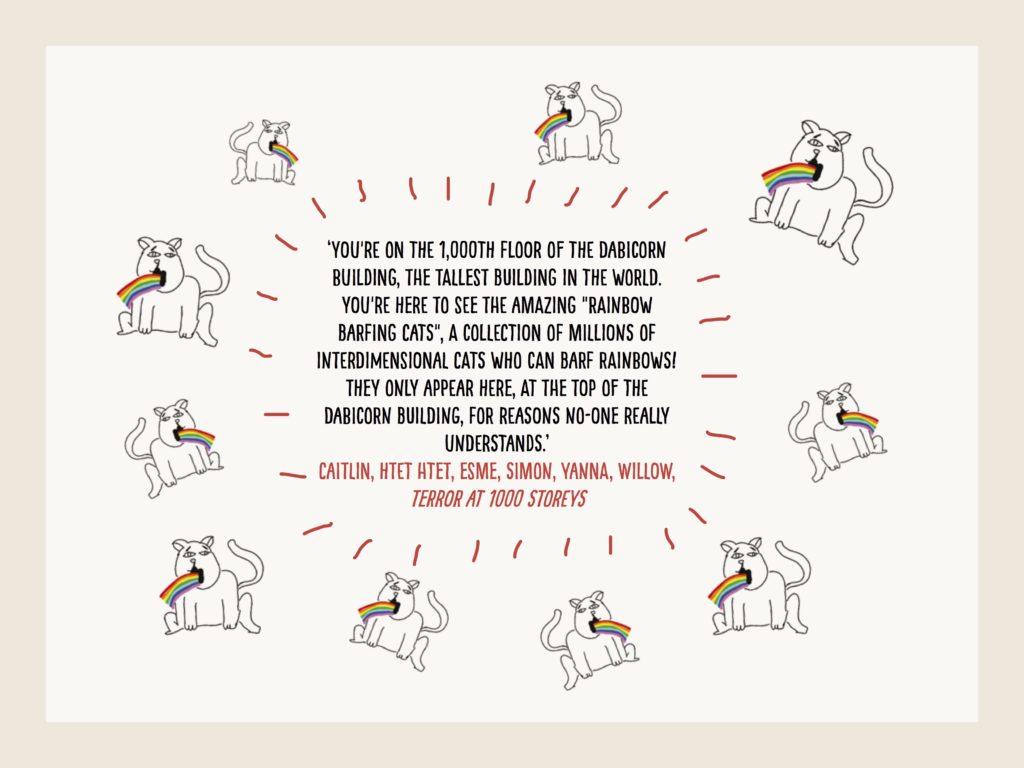 Shoes of Doom is a zine featuring micro stories by young writers aged 5 to 16 in collaboration with artist Cam Baker. Published by 100 Story Building: 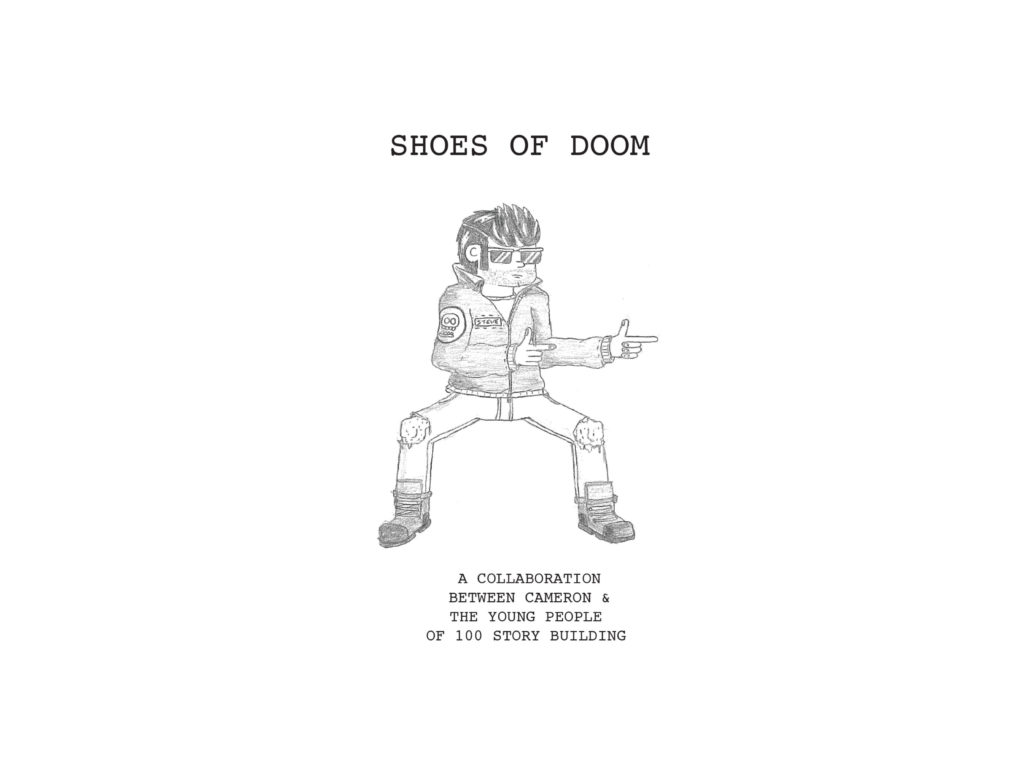 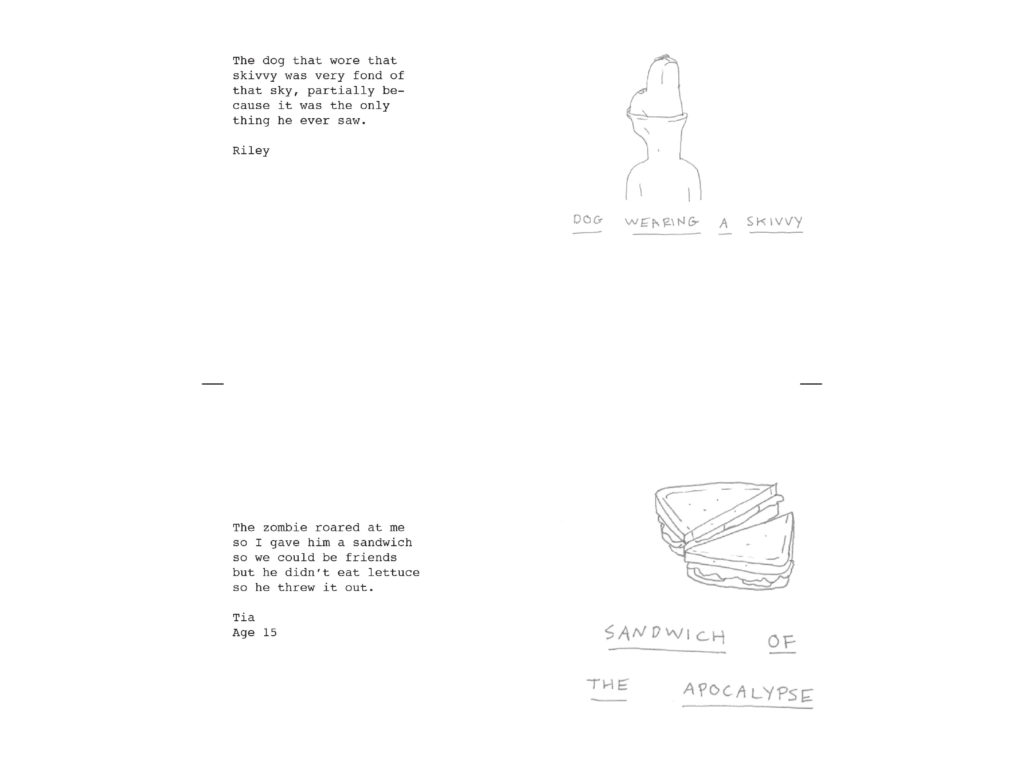 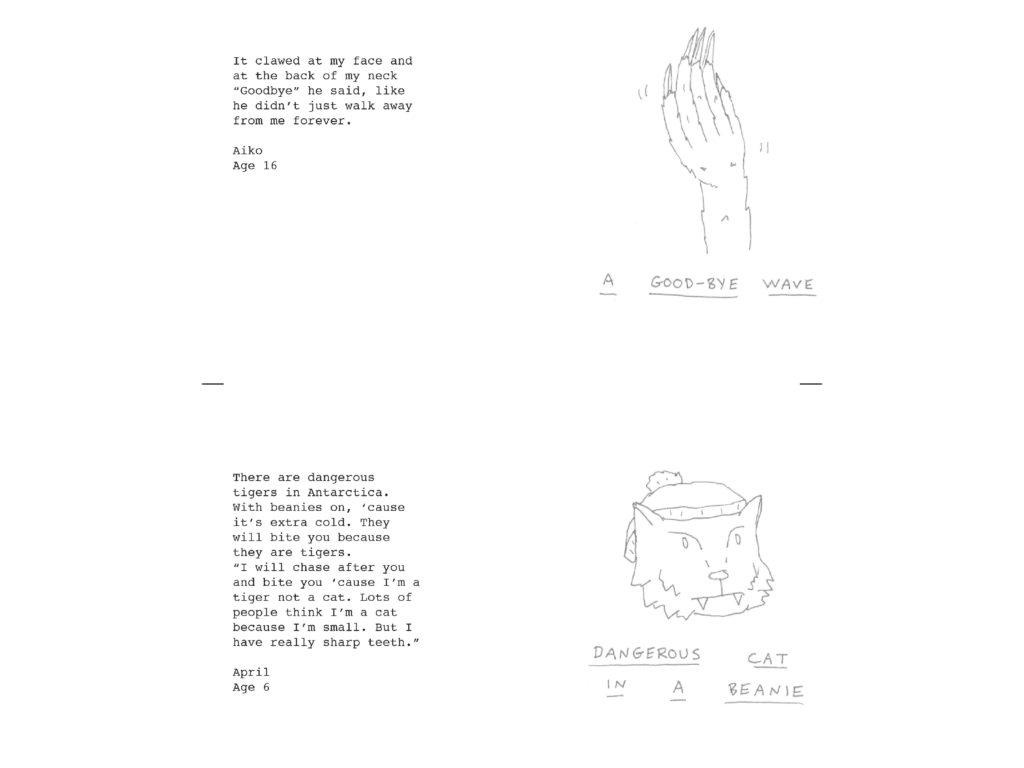 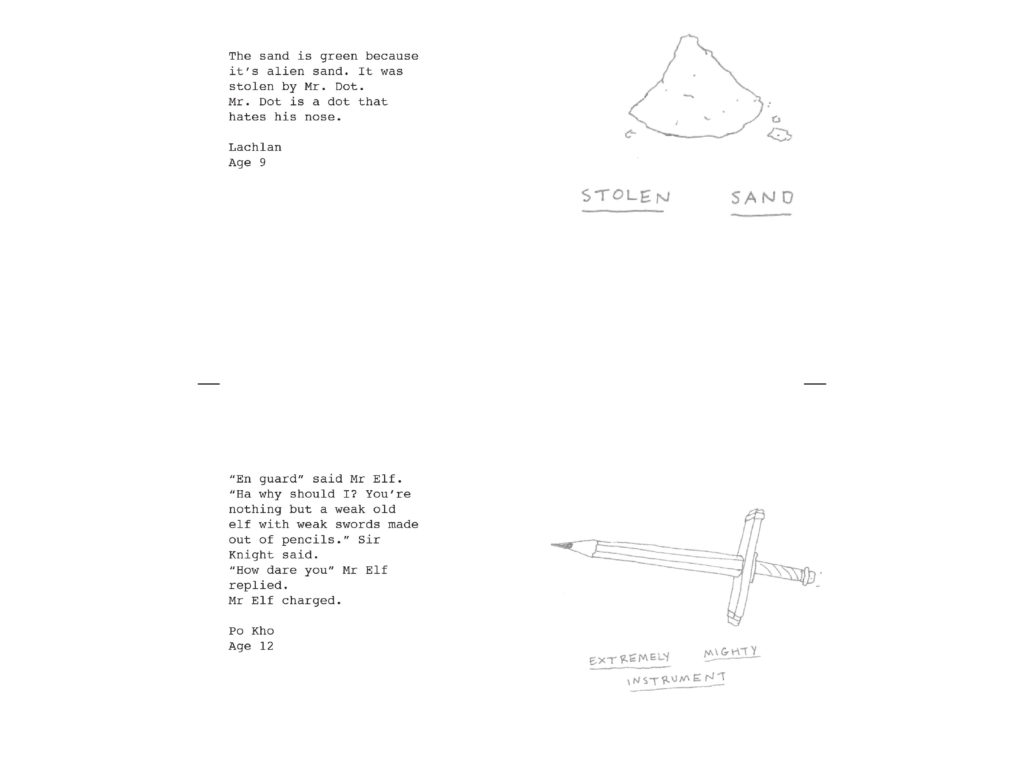 In this podcast, young writers at 100 Story Building share micro stories and discuss important matters such what if Fitbits could act as ‘homework completers’ and where do baby apes sleep:

Level 87 Podcast
Over the summer holidays, the members of Level 87 Book Club managed to prise open the trapdoor and sneak down the 100 Story Building elevator to record their very first podcast. Too bad the elevator doors were rusted shut due to poor maintenance service checks!

Nevertheless, they were able to utilise their new sound recording and editing skills to capture the mysterious sounds from the underground levels, talk about their favourite books and report back their findings on the definite lack of snacks available.